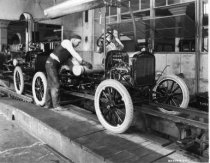 A Ford assembly line with a worker attaching a gas tank. (circa 1923). (Photo by Fotosearch/Getty Images)

Cars changed the way people lived, worked, and enjoyed leisure time; however, what most people don’t realize is that the process of manufacturing automobiles had an equally significant impact on industry. The creation of the assembly line by Henry Ford at his Highland Park plant, introduced on December 1, 1913, revolutionized the automobile industry and the concept of manufacturing worldwide.

Henry Ford was not a newcomer to the business of automobile manufacturing. He built his first car, which he christened the “Quadricyle, ” in 1896. In 1903, he officially opened the Ford Motor Company and five years later released the first Model T.

Although the Model T was the ninth automobile model Ford created, it would be the first model which would achieve wide popularity. Even today, the Model T remains an icon for the still-existing Ford Motor Company.

Henry Ford had a goal of making automobiles for the multitudes. The Model T was his answer to that dream; he wanted them to be both sturdy and cheap. In an effort to make Model T’s cheaply, Ford cut out extravagances and options. Buyers couldn’t even choose a paint color; they were all black.

The cost of the first Model T was set at $850, which would be approximately $21, 000 in today’s currency. That was cheap, but still not cheap enough for the masses. Ford needed to find a way to cut down the price even further.

In 1910, with the aim of increasing manufacturing capacity for the Model T, Ford built a new plant in Highland Park, Michigan. He created a building that would be easily expanded as new methods of production were incorporated.

Ford consulted with Frederick Taylor, creator of scientific management, to examine the most efficient modes of production. Ford had previously observed the assembly line concept in slaughterhouses in the Midwest and was also inspired by the conveyor belt system that was common in many grain warehouses in that region; he wished to incorporate these ideas with the information Taylor suggested to implement a new system in his own factory.

One of the first innovations in production that Ford implemented was the installation of gravity slides that facilitated the movement of parts from one work area to the next. Within the next three years, additional innovative techniques were incorporated and, on December 1, 1913, the first large-scale assembly line was officially in working order.

The moving assembly line appeared to the onlooker to be an endless contraption of chains and links that allowed Model T parts to swim through the sea of the assembly process. In total, the manufacturing of the car could be broken down into 84 steps. The key to the process, however, was having interchangeable parts.

Unlike other cars of the time, the Model T featured interchangeable parts, which meant that every Model T produced on that line used the exact same valves, gas tanks, tires, etc. so that they could be assembled in a speedy and organized fashion. Parts were created in mass quantities and then brought directly to the workers who were trained to work at that specific assembly station.

The chassis of the car was pulled down the 150-foot line by a chain conveyor and then 140 workers applied their assigned parts to the chassis. Other workers brought additional parts to the assemblers to keep them stocked; this reduced the amount of time workers spent away from their stations to retrieve parts. The assembly line significantly decreased the assembly time per vehicle and increased the profit margin.

Impact of the Assembly Line on Production

The immediate impact of the assembly line was revolutionary. The use of interchangeable parts allowed for continuous work flow and more time on task by laborers. Worker specialization resulted in less waste and a higher quality of the end product.

Sheer production of the Model T dramatically increased. The production time for a single car dropped from over twelve hours to just 93 minutes due to the introduction of the assembly line. Ford’s 1914 production rate of 308, 162 eclipsed the number of cars produced by all other automobile manufacturers combined.

These concepts allowed Ford to increase his profit margin and lower the cost of the vehicle to consumers. The cost of the Model T would eventually drop to $260 in 1924, the equivalent of approximately $3500 today.

Impact of the Assembly Line on Workers

The assembly line also drastically altered the lives of those in Ford’s employ. The work day was cut from nine hours to eight hours so that the concept of the three shift workday could be implemented with greater ease. Although hours were cut, workers did not suffer from lower wages; instead, Ford nearly doubled the existing industry standard wage and began paying his workers $5 a day.
Source: history1900s.about.com