Following the AFN Charter and as directed by Chiefs-in-Assembly, the AFN actively engages with Parliamentarians to advocate and advance the aspirations of First Nations. In addition, the AFN monitors and directly engages on legislation which could have impacts on First Nations rights and interests. When Parliament is in session, we provide weekly summaries of activities in the House of Commons, the Senate, and committee business.

Nationtalk’s Nick Ashawasega recently spoke with National Chief Perry Bellegarde of the Assembly of First Nations (AFN). The main topic of conversation surrounded the recent Truth and Reconciliation Commissions’ update on their Final Report, which will be released later this year.

There were many findings and Calls to Action which National Chief Perry Bellegarde highlight and explains we have found the truths, but now is time to truly reconcile. Please listen for more information. Click here to listen 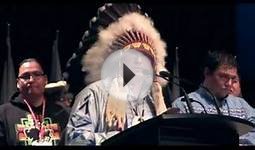 New Assembly of First Nations chief Pipelines on our terms